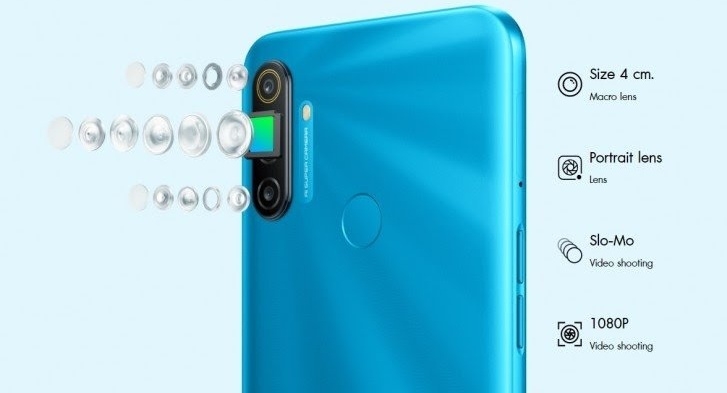 recently announced, it will launch a new smartphone series on 21 April 2020. And now according to the report, Realme’s first triple camera smartphone Narzo 10A Specs confirmed. This smartphone is the remake of the Realme C3 triple camera smartphone, which is recently announced in Thailand.
NARZO 10a SPECS
Display –  6.5-inch HD+ IPS LCD display
Processor – MediaTek Helio G70
Front Camera – 5-megapixel (f/2.0, 1-micron)
Rear Camera – 12MP primary sensor, a 2MP depth sensor, and a 2MP macro lens
RAM – 2GB/3GB/4GB
Storage – 32GB/64GB
Battery Capacity – 5000mAh with fast charging
OS – Realme UI based on Android 10
Fingerprint sensor – Yes
The new variant of the Realme Narzo 10A has a triple rear camera setup – a 12MP primary sensor, a 2MP depth sensor, and a 2MP macro lens, which can take close-up images of objects from a distance of 4cm. The front camera of this variant of the Realme Narzo 10s is still a 5MP unit.
Realme Narzo 10A comes with a 6.5-inch HD+ IPS LCD display with a waterdrop notch at the top. Powering the device is a MediaTek Helio G70 chipset. Talking about the operating system, the Realme Narzo 10s runs on the latest Android 10 OS with the company’s in-house Realme UI baked on top of it.
Another thing worth noticing is the fact that the Realme Narzo 10s triple-camera variant features a rear-mounted fingerprint scanner, something which is missing out on the Indian variant of the device. As claimed by the company fingerprint scanner, can unlock the device in 0.27 seconds. The device is available in two color variants – Blazin Red and Frozen Blue.
The Realme Narzo 10A is being offered in three memory configurations – 2GB/32GB, 3GB/32GB, and 4GB/64GB. The internal storage can further expand with the help of an external SD card. One can expand the storage of the Realme Narzo 10A smartphone by up to 256GB.
Realme Narzo 10A is powered with a big 5,000mAh battery. The big let-down here is the fact that there is no USB Type-C charging port and one would have to make do with a more conventional USB 2.0 charging port. Thankfully enough, there is still a 3.5mm headphone jack retained.
Via